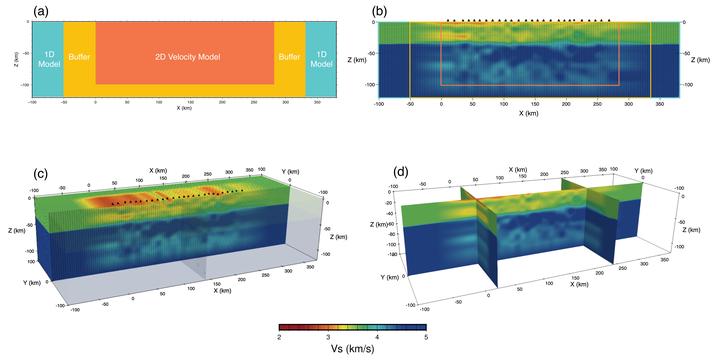 The Ailaoshan Red River shear zone (ARSZ) was formed in the Mesozoic as a suture zone between the Indochina block and the Yangtze craton. Since the Cenozoic, block extrusion due to the Indo-Asian collision has reactivated the fault zone and caused large-scale shearing. Affected by the Cenozoic orogeny, a large volume of magmatic and metamorphic rocks developed in the ARSZ, forming many orogenic gold deposits. However, the source and the geodynamic process of these magmatic activities are still unclear. To gain a basic understanding of the subsurface magmatic activity, we deployed a dense array of 24 broadband seismic stations across the Daping and Chang’an gold deposits at the southern end of the ARSZ. Receiver function analysis, common conversion point stacking, and a joint inversion of receiver functions and surface wave dispersions are performed to image the detailed structure of the crust and uppermost mantle. Low-velocity zones in the mid-lower crust and thinned lithosphere (∼70 km) are imaged under the ARSZ. The observed subsurface structures are verified by 3D numerical modeling with the SEM-FK method. We speculate that the mantle upwelling caused by lithospheric delamination has provided the main source of the mantle component in the magmatic rocks since ∼35 Ma; afterward, high temperatures produced partial melting in the lower crust, which was emplaced along active shear zones.